Is There More Workers' Comp Fraud in the Hospitality Industry?

We see worker’s comp fraud stories in the news every day. Most news stories are of high-profile cases. Remember former Pinellas County, Florida bus driver Bruce Gilbert? He claimed to have a mental ailment for 10 years, enjoying benefits of $774,000.  He was nabbed in April of 2000 while playing golf.

Another famous story is that of California driver Crystal Burrill.  She claimed to have spine and neck injuries from work. She was caught on tape taking a spill from horseback at a rodeo event.

Unfortunately, fraud goes well beyond these false claims made by employees. And make no mistake — all industries have worker’s compensation fraud. But employees aren’t the only ones scamming the system. Employers, workers’ compensation attorneys, and health care providers also commit fraud.

In 2014, 9 of the top 10 fraud cases were non-employee cases (North Carolina Journal of Workers' Compensation). Would you believe to the tune of $74,876,000? A staggering amount by any measure.

The number one case on that list is Aspen Medical Resources. Its owners were indicted for conspiracy to commit insurance fraud. They overbilled insurers $36 million for renting physical therapy machines.

Employers, doctors, nurses, pharmacists, and other medical professionals dominate the rest of this list. Which just goes to show that no one is immune from committing fraud.

Every day we see stories about employees who make false injury claims. But abusers, who claim to be injured when they are not, are a mere fraction of the problem.

Injured employees can (and often do) take advantage of the system. They fail to cooporate with their treatment plans. They exaggerate their symptoms, or stall the claims process.

And some employees fall through the cracks in the system. They may have a legitimate claim and follow their treatment. But new workers may replace them. Busy adjusters and employers move on to other claims, often forgetting about them. These “forgotten and forlorn” employees keep reporting to their doctor, providing a disability note to their employers, and keep collecting benefits. And so it goes.

Health care providers also commit workers’ comp fraud. Some of these cases come from dishonest medical clinics (aka medical mills) that team up with lawyers to scam the system. Other health care providers bill for treatments, tests, or services they don’t give. Or for using unnecessary medical equipment.

Many employers are also guilty. Employers commit worker’s comp fraud whenever they:

Worker’s comp fraud can go unchecked and unnoticed for years. Hospitality providers, in particular, need to replace injured workers quickly. To amplify the problem further, they often don’t have alternative duties for injured employees. This makes them prone to fraud by opportunistic, forlorn, or forgotten injured workers.

But the WC industry’s greatest costs are not from dishonest or disgruntled employees. In recent years, fraud committed by employers and health providers has eclipsed that of false employee claims.

No, It’s Definitely Not Just Hospitality

Any industry likely to hire low-wage employees or those who aren’t on the worksite (whether under the table or as contractors), has a much higher risk of employer fraud because they are misclassifying employees.

Stay Safe: Do A Hard Review and Use Best Practices and Processes

Combatting workers’ comp fraud in the hospitality industry means you should include a hard review of your employment and business practices, the health care providers you use, and your claims processes. It's time to stop focusing only on how genuine employees’ claims are. The best defense for any employer is implementing best practices and processes that are proven to reduce fraud. 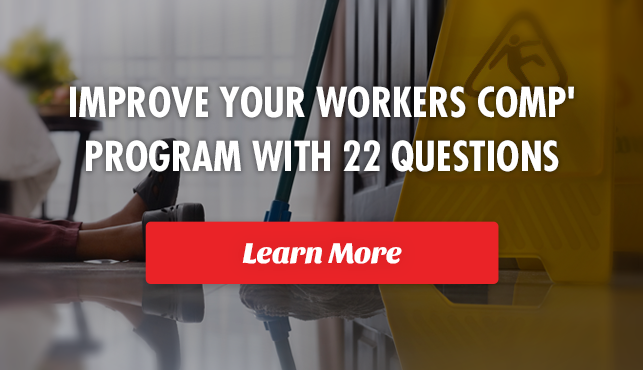